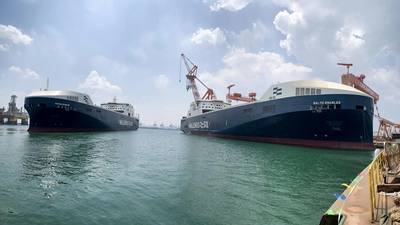 The newbuild, together with sister ship Botnia Enabler delivered earlier this year, are considered to be the world’s largest ice-rated ConRo vessels with multi-fuel operation.

“It’s fantastic that we can soon put both sister ships in regular traffic. Not only will we have a huge capacity increase on the container and RoRo sides, but we will also take a giant stride toward a future-oriented fleet that will reduce emissions and have a major impact on industry in the Gulf of Bothnia,” says Ragnar Johansson, Managing Director at Wallenius Sol.

The newly built vessel, which has Finnish-Swedish ice class 1A, an LOA of 242 meters and a beam of 35.2 meters, is sailing under the Swedish flag.

In addition to their size, the Enablers are characterized by their high environmental performance and a design specially suited to the shipping requirements of the Swedish and Finnish base industry. According to Swedish Environmental Research Institute (IVL) estimates, the vessels will be able to reduce greenhouse gas emissions by 63 per cent, NOx by 96 per cent and SOx and particulates by 99 per cent. With regard to the socio-economic effects of the reduced CO2 emissions, IVL expects Wallenius Sol will be able to reduce society’s costs by many millions of kronor every year, thanks to the generation shift the vessels represent.

Now that Baltic Enabler is beginning her maiden voyage, she will call at a number of ports in Asia before heading toward Belgium and Europe. She will then begin trafficking her regular Zeebrugge-Antwerpen-Kokkola-Skelleftea-Oulu-Kemi-Travemünde route.

“Finally having both vessels in our possession is a great feeling. It’s been a long process, what with the pandemic and the challenges it brought. In spite of this, the team at CIMC Raffles in Yantai has done a fabulous job,” Johansson said.

Wallenius Marine in collaboration with Knud E Hansen led the design work and the construction project for the two sister ships. Wallenius Marine will also be responsible for manning and technical operation of the new vessels.