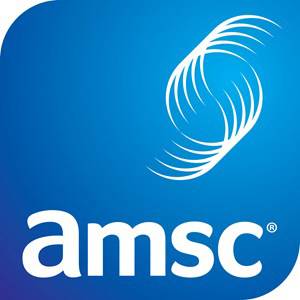 AMSC (Nasdaq:AMSC), a global solutions provider serving wind and grid leaders, today announced that it has reduced its workforce by approximately 25 percent and is consolidating office space to lower operating costs and enhance liquidity in response to challenging conditions in the wind power market. Reductions have been made across all of AMSC's major geographic locations and functions. The company now has a global workforce of approximately 340 employees.

"While the long-term prospects for renewable energy remain bright, conditions in the sector today are challenging," said AMSC President and Chief Executive Officer Daniel P. McGahn. "Financing and cash flow among wind farm developers and wind turbine manufacturers have been constrained, which has impacted growth plans for some of our Windtec™ Solutions partners. Given this environment, we made the difficult but prudent decision to reduce our workforce in order to weather the industry downturn and minimize our cash usage."

AMSC expects that today's action will reduce its annualized expenditures by approximately $10 million and will lower its annualized operating expenses, which include non-cash compensation costs, to less than $58 million once the savings are fully realized in the fiscal quarter ending June 30, 2013. In total, AMSC anticipates that it will incur restructuring charges of approximately $3 to $4 million over the next two quarters relating to the workforce reduction and office consolidations. Of this total, the company expects to pay approximately $2 million in cash severance costs in the fiscal quarter ending December 31, 2012.

As previously announced, AMSC expects to reduce its balance of restricted cash in the third fiscal quarter by paying or settling the majority of its remaining liabilities for adverse purchase commitments, which amounted to approximately $12 million as of September 30, 2012. Factoring in these expected payments and settlements as well as cash-related severance costs, AMSC now expects to have more than $48 million in cash, cash equivalents, marketable securities and restricted cash on December 31, 2012.