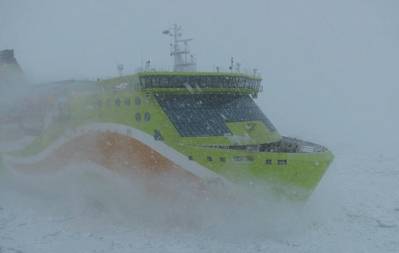 Bureau Veritas has developed rules and guidance notes for operation in Arctic environments. These include a Cold notation, Polar Class Rules, guidelines for Ice class selection and rules for designing propulsion in ice. The following is from Bureau Veritas’ VeriSTAR News newsletter:

Background
Climate change is opening Arctic routes to navigation. The Northern Sea Route (North of Russia) and the North West passage (North of Canada and Alaska) offer considerable savings in sea miles for Europe – Asia trade routes. The route from Rotterdam to Yokohama could be reduced from 11,250 miles to 7,350 miles by using the Northern Sea Route.

The potential is there, but it is very early days. There were forty Arctic route trading voyages in 2013 moving about one million tonnes of cargo. That compares to the 700 million tonnes moving through the Suez Canal. But the ice is receding every year, and the maritime industry has to think now about how to serve these routes safely and cleanly.

The opening of the Arctic is not just for trading routes, it also offers access to abundant natural resources including oil, gas, minerals and fish. All these opportunities call for new vessels adapted to Arctic conditions. But there are challenges.

Winter ice can reach over 2 m thickness, temperatures drop to between -40°C and -50°C, leading to difficult working conditions, it is dark for six months, there is little or no coastal infrastructure and distances from bases or ports are long. The eco system is very vulnerable, and navigation in convoy is necessary, which increases the risk of collision.

Arctic R&D
There is a lot of innovation required to be ready as the Arctic opens. That is why Bureau Veritas has an active Arctic research and development programme which has developed its ice loads tool IceSTAR in cooperation with Saint Petersburg University. BV works within JIPs, with major shipyards, and Canadian and Russian institutes on specific issues for vessels adapted to extreme winter climates.