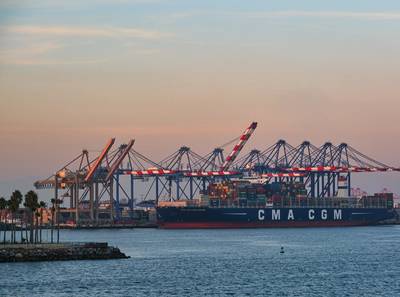 CMA CGM, the world's fourth-largest container shipping line, said its EBITDA margin rose to 21.0% in the third quarter from 17.2% in the previous quarter and 13.3% in the year-earlier period.

Brisk shipping activity should allow CMA CGM to increase the EBITDA margin further in the final quarter, it said.

Like market leader Maersk, which this week raised its full-year earnings target, CMA CGM has pointed to strong shipments for e-commerce as the coronavirus pandemic shifts consumer demand online.

"During the fourth quarter, maritime activity is more sustained than during the third quarter due to the ongoing increase in volumes," CMA CGM said.

"This momentum is particularly marked in the United States and Latin America and allows the fleet to continue operating at full capacity, as during the third quarter."

CMA CGM's third-quarter shipped volumes rose 16.8% compared with the prior quarter and were also 1% above the level in the third quarter of last year.

The company reported a third-quarter net profit of $567 million which compared with a $136 million profit in the second quarter and $45 million in the year-earlier period, when the acquisition of CEVA Logistics had weighed on earnings.

Earnings before interest, tax, depreciation and amortization rose to $1.7 billion from $1.2 billion in the second quarter.

CEVA Logistics, whose takeover marked an expansion by CMA CGM in non-maritime transport, returned to profit with $1 million in third-quarter net income.

CMA CGM said it would redeem early $750 million of debt in the coming weeks.

The group last month issued a new 525 million euro ($623 million) bond to cover a bond due in January, helped by drop in its yields.