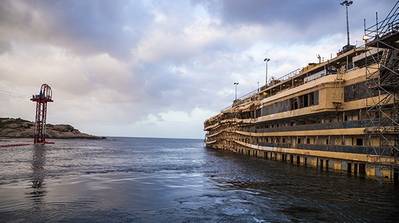 A  meeting of Giglio residents heard that the Condordia is stable: after the minor movements registered in the 15 days following the parbuckling operation the wreck has settled on the platform and seabed. Since then, the monitoring systems active 24/7 have not indicated any significant movement.

Present at the meeting with Giglio residents were Maria Sargentini, Chairman of the Observatory, Sergio Ortelli, Mayor of Giglio, and Franco Porcellacchia, coordinator of the Concordia wreck removal project for Costa Crociere.

The meeting also was informed that In the Livorno and Genoa shipyards, work is in progress to prepare the 15 sponsons that will be positioned on the starboard side (land side) and the remaining 4 on the right side (sea side) in order to proceed with the refloating phase and have the wreck ready for towing by the end of June 2014.

The sponsons will be completed with the installation of strand jacks in the shipyards and will be transported in vertical position to Giglio Island in the spring of 2014.

Finally, Costa informed that 405 safes have been removed from the dry cabins on board the wreck in agreement with judicial authorities; contents will be inventoried and handed back to their owners.