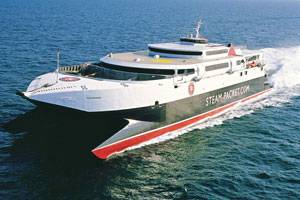 When the Isle of Man Steam Packet Company purchased its latest Incat-built high speed ferry for service on the Irish Sea it continued a relationship established 22 years ago. In 1987, Incat’s chairman Robert Clifford was invited by naval architects Hart Fenton, acting for then Steam Packet shareholder Sea Containers, to visit the Isle of Man with a view of building a high speed craft to serve the island’s needs. Three years later, in November 1990 the first generation Incat car ferry Hoverspeed Great Britain arrived in the island for trials.

The craft demonstrated that ferry crossing times could almost be halved. In 1994 the 74 metre SeaCat Isle of Man made her debut on the Manx routes – a vessel which continues in Isle of Man Steam Packet service today as the Snaefell. Nineteen years after the Hoverspeed Great Britain’s demonstration exercise, the fifth generation 96 metre Wave Piercing Catamaran Manannan has made her debut on the busy Douglas to Liverpool service.

The Manannan is now the largest diesel-powered high speed craft on the Irish Sea with greater cruising speed and increased vehicle and passenger capacity than the vessel she replaces. Onboard facilities have been enhanced to offer a variety of seating including two cinema lounges, a large bar area and the Coast-to-Coast cafe, the upper deck skylounge offers a range of pre-bookable seating including Premium and Manannan Executive Club.

The Isle of Man Steam Packet Company is the oldest continuously operating passenger shipping company in the world and in 2010 will celebrate 180 years of service.