Man Arrested over Death of Stowaway in Shipping Container 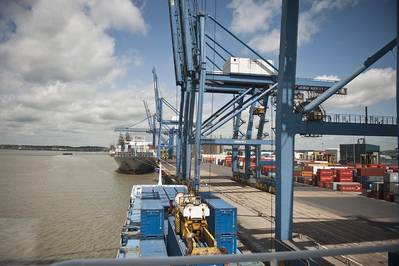 A man was arrested in Northern Ireland on Tuesday on suspicion of murder after the death of an Afghan Sikh who was among 35 suspected stowaways found in a shipping container at a dock in England three days ago, police said.

Police said the 34-year-old man was arrested just after midday on a motorway at Banbridge, about 28 miles (45 km) south-west of Belfast.

He will be taken to England for questioning by Essex police on suspicion of murder and of facilitating illegal entry into the United Kingdom. His home in Limavady, Northern Ireland, was also being searched.

"This is a fast-moving investigation which has already involved a number of police forces and law enforcement agencies from across the United Kingdom and Europe," said Acting Detective Chief Inspector Martin Pasmore of Essex Police.

The body of Meet Singh Kapoor, 40, was found on Saturday when staff at Tilbury docks in Essex heard screaming and banging coming from a container being unloaded after arriving on a ferry from Zeebrugge in Belgium. The cause of his death has yet to be established.

They found a total of 35 people in the shipping container, including about 13 children aged between one and 12, who were believed to be from Afghanistan and mainly Sikhs. Several needed hospital treatment for hypothermia and dehydration.

Sikhs make up a tiny minority in Afghanistan's population of around 31 million people.

Police are continuing investigations to find out how the people came to be in the container.

Tilbury, on the River Thames in eastern England, is primarily a bulk cargo and container port and not such a prime target for illegal immigrants as those on the south coast, such as Dover.