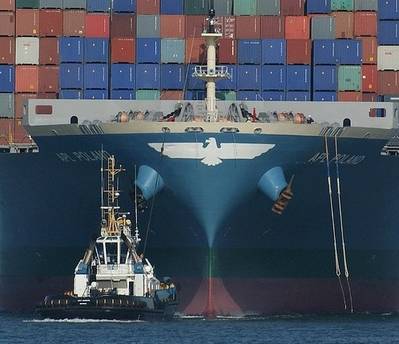 The design has been optimized for an operating profile along the Far East to Europe trade route involving nine speed and draught combinations. The installed propulsive power could be reduced by about 16 per cent compared to the initial hullform optimized for one draft & speed condition.

The first of the new 13,800 TEU ships is under construction at Hyundai Heavy Industries (HHI) and will be delivered next year.

Traditionally container ships spend much of their time operating at ‘off-design’ conditions which increase hull resistance and reduce propeller and engine efficiency. In this case, the ships will operate at speeds typically ranging from 15 to 19.5 knots but with a maximum speed of about 23 knots. With the aid of sophisticated software and virtual sea trials, the three partners were able to analyse the proposed trading pattern of the ships and optimise accordingly.

The resulting fuel savings will be worth about US$3-million per ship per year to APL. “In the current challenging market environment it is extremely important for APL to introduce efficient and flexible container ships, which help us to reduce slot costs. These ships will be the most fuel-efficient ships ever built to the Asia-Europe container trade,” says Cedric Foo, Group Deputy President and CFO of APL’s mother company NOL. “APL has decided to advance the delivery of the newbuildings, which have been ordered in 2011 using their superior fuel efficiency to make a contribution to cutting emissions as soon as possible.”

“For design optimization an innovative methodology has been deployed. Ideas and further innovation have been made more specific based on the DNV Quantum concept launched in 2010. We are pleased to see that this is utilized by HHI and APL for real designs now,” says Tor Svensen, President DNV Maritime and Oil & Gas.