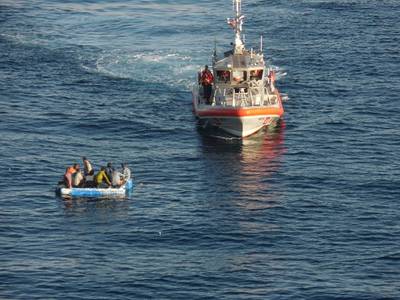 The Crowley-managed, Philadelphia Express – a 3,237 TEU containership – recently provided assistance to nine Cubans on a makeshift raft adrift near Key West, Fla. As the vessel was steaming from Houston, Texas to Savannah, Ga., crewmembers spotted the floating object with people aboard waving in distress.

Captain D.A. Sulin, master, Philadelphia Express, began circling back to the position of the raft and notified U.S. Coast Guard Sector Key West of the situation. Upon order from USCG, the vessel passed close to the raft to better determine the nature of the distress and was then asked to stay on scene to prevent other large vessel traffic getting to close to the raft and to boost the morale of the raft’s occupants until the USCG response vessel could arrive. The eight-foot long by five-foot wide raft was made up of large blocks of Styrofoam and was floating very low in the water with less than a foot above the waterline.

Once the USCG arrived on scene, Philadelphia Express was released from her standby duties and proceeded on her course towards the port of Savannah.

“The crewmembers participating in this event acted in a very professional manner and are all pleased to have contributed to this rescue effort,” said Captain Sulin. “The Coast Guard vessel was on scene in a remarkably short amount of time and clearly had established procedures in place to affect the rescue.”