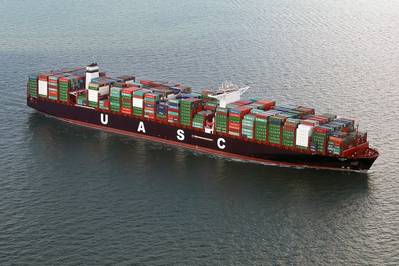 United Arab Shipping Company (UASC) and Red Sea Gateway Terminal (RSGT) celebrated the world’s greenest ultra-large container vessel 18,800TEU M.V. Al Nefud during its maiden call to RSGT at Jeddah Islamic Port today. The event was attended by Dr. Nabeel Al-Amudi, President of the Saudi Ports Authority and Chairman of UASC, Mr. Waleed Al Dawood, COO at UASC and Mohammed Al-Mudarres, CEO at Saudi Industrial Services Company (SISCO), along with senior government and business dignitaries and officials.
Speaking at the ceremony, Dr. Nabeel Al-Amudi said, “The arrival of M.V. Al Nefud at Jeddah Islamic Port is yet another significant milestone in the Port’s track-record of achievements and an indicator of the increasing importance of the port and KSA in the shipping industry.”
“Jeddah Islamic Port is equally capable of receiving and handling vessels of this size and class,” he added. “Ports are considered to be the backbone of a country’s economy and the Saudi Ports Authority always seeks to support the ongoing development in the Kingdom through providing services of the highest standards.”
“Today we are very proud to celebrate the arrival of the 18,800TEU ultra-large container vessel, with a length of 400 meters and a draft of 16 meters. The arrival of this caliber of vessel is undoubtedly a big leap in the handling and logistics services at the port; at the same time, it is a clear assurance of the Port’s high operational capabilities,” said Mohammad Zenel Alireza, Chairmen of Saudi Industrial Services Co.
“UASC is very proud of its strong ties with KSA and the Saudi Ports Authority as we continue to provide our Saudi customers with efficient and effective shipping solutions using different ports in the kingdom,” said Waleed Al Dawood, Chief Operating Officer at United Arab Shipping Company. “KSA has been one of UASC’s key shareholding nations and the Kingdom provided significant support since its establishment in 1976.”
“UASC vessels made 300 calls to Saudi Ports in 2015 and handled 1,230,000TEU onboard its own vessels to and from different Saudi Ports in the same year,” he noted.
“Celebrating M.V. Al Nefud’s arrival at RSGT in Jeddah Islamic Port is an example of the strong ties between the different entities in KSA and UASC, this event is unique because it coincides with UASC’s 40th anniversary and Al Nefud is one of the largest in our fleet, as well as one of the world’s greenest vessels due to its outstanding environmental credentials. This leading class of ships has contributed greatly to lowering the CO2 emissions of UASC’s owned fleet. As pioneers in providing sustainable shipping solutions, UASC will soon reveal a very ambitious environmental target,” he concluded.
“We are very proud of the efficiency levels involved in handling such large vessels, producing high levels of productivity in terms of efficiency and speed at the terminal. Having both talented teams and excellent output onboard is part of our customer service philosophy. The Terminal is very capable of handling such vessels, serving 450 ultra-large vessels since beginning operations,” said Soren Hansen, RSGT Managing Director.