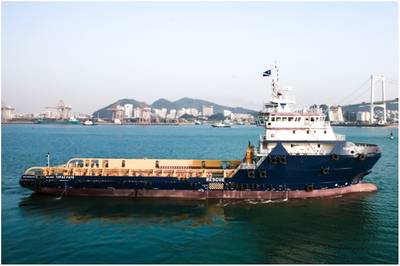 Topaz Energy and Marine, an offshore support vessel company with primary operations in the Middle East and Caspian, announced a new contract win for its fast growing West Africa operation.

Under the terms of the $11 million agreement, Topaz will supply a global oil major with a platform supply vessel, the Topaz Faye, for 18 months to support its offshore production operations. This contract comes on the back of several recent contract wins in West Africa and further strengthens Topaz’s $1.2 billion contract backlog.

The deployment of Topaz Faye in West Africa brings the total number of vessels under operation by Topaz in the region to 10, representing approximately 10% of Topaz’s total fleet. As part of its global expansion strategy, the company is building up its capabilities in West Africa as the region represents a long-term growth opportunity for Topaz with above market growth in industry activity and OSV demand.

Topaz Faye, a medium size DP2 PSV, was recently delivered together with four sister vessels and brings the total number of vessels in Topaz’s fleet to 95, excluding two under construction, with an average age of seven years against an industry average of around 15 years.