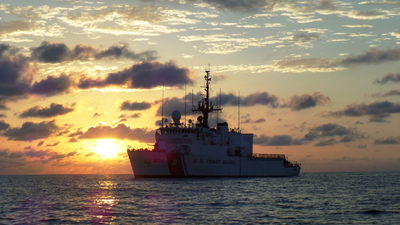 The crew of Coast Guard Cutter Northland returned to Portsmouth Thursday following an 81-day, counter-drug patrol in the Eastern Pacific.
The crew of the Northland interdicted five vessels, detained 16 suspected drug traffickers, and seized a total of 7,564 kilograms of cocaine, worth approximately $252 million.
The crew conducted exercises with the Naval Forces of the Army of Nicaragua and participated in multiple events to help improve diplomatic relations between the U.S. and Nicaragua.
These events included a media tour of the cutter that included 13 Nicaraguan media outlets who were escorted by the U.S. Embassy public affairs team.
The crew hosted members of the Naval Forces of the Army of Nicaragua, including the Chief of Naval Forces and other senior officers, exchanged information on counterdrug interdiction tactics and practiced pursuit and boarding exercises off the coast.
While in Nicaragua, the crew also planted 1,000 trees in a local national park, and traveled to an elementary school to repaint facilities for the students.
"The phenomenal accomplishments of this patrol were the result of the outstanding performance of our entire crew,” said Cmdr. Marc Brandt, commanding officer of Cutter Northland. “When operations, international engagements, equipment casualties, or logistics needs extended our work hours or changes our schedule, this crew was completely dedicated to overcoming challenges by working together. It is an absolute honor to serve alongside everyone aboard."
Northland is a 270-foot ship whose crew executes maritime law enforcement, homeland security, and search and rescue missions in support of Coast Guard operations throughout the Western Hemisphere.