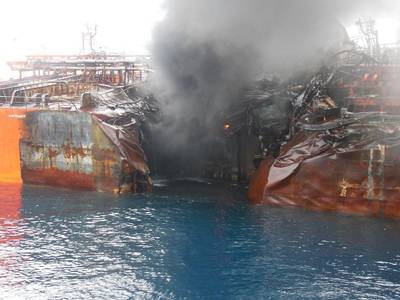 Fifty days on, the maximum bending moment for the chemical carrier Maritime Maisie exceeds estimated damage strength limits. The ship will be in danger of breaking up if subjected either to worsening weather or a long ocean tow

Lloyd’s Register’s Ship Emergency Response Service (SERS) has been working with the shipmanagers of Maritime Maisie, Singapore based, MSI Shipmanagement, to develop a plan to best manage the casualty and help ensure the ship can be taken to a secure anchorage where the remaining cargo can be transferred safely.

Maritime Maisie was opened to the sea well above and below the waterline (see picture) in way of cargo tanks four and five following the collision with the pure car and truck carrier Gravity Highway off Busan on December 29, 2013. The combination of the collision damage and fire has severely weakened the local and global structural strength of the ship. The prolonged exposure to swells of up to four metres may also have contributed further damage and continued exposure will only make this worse.

It has been 51 days since the collision and a month since the fire was extinguished. Now the maximum bending moment (see notes) for the Hong Kong flagged Maritime Maisie exceeds estimated damage strength limits.

Following new data and images from the ship, there is a growing concern for the structural integrity of the tanker. Thus, the call for the Port of Refuge is most critical.

In planning for this worst eventuality, MSI Shipmanagement had requested Lloyd’s Register to investigate the survivability of the ship should the hull girder fail and break in two, including the effects of escalation by failure of exposed bulkheads. Calculations show that immediately following a structural failure, both halves of the ship will remain floating upright.

If sheltered water can be found then further calculations have demonstrated that the ship’s remaining cargo can be offloaded without exceeding estimated strength limits.

"Continued exposure to seas will weaken the ship’s structure – at some point it is likely to fail," commented Wijendra Peiris, SERS Team Leader, Lloyd’s Register. "Maritime Maisie needs to be taken to a safe haven and offload its cargo – as soon as possible. We would be very concerned if the ship is towed for a lengthy period in the open ocean or remains where she is for an extended period."
The ship was carrying 30,000 metric tonnes of cargo. It is estimated that about 4,000 mt of cargo was lost to the sea, atmosphere or was consumed by fire.
Maritime Maisie has been enrolled in Lloyd’s Register’s SERS programme since 2007.