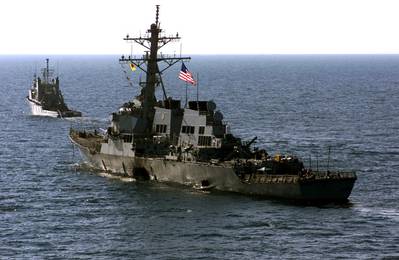 Defense lawyers for the Saudi man charged with masterminding the 2000 USS Cole bombing that killed 17 American sailors argued on Friday he should not face the death penalty because the murders were not premeditated.

The move was among several pre-trial motions heard in the murder case against Abd al-Rahim al Nashiri at Guantanamo Bay, Cuba, viewed by closed-circuit television at Fort Meade.

The charges Nashiri is faced with - among them murder, terrorism and conspiracy - carry the death penalty.

In arguing for dismissal of the death penalty in his case, lawyers for the 49-year-old Saudi national challenged the constitutionality of several facets of the military commissions, among other arguments.

Defense counsel Navy Commander Brian Mizer in one motion argued that when murder is not premeditated, the death penalty shouldn't apply.

"It is going to involve substantial involvement - not just rented an apartment, not just bought a boat," said Mizer, citing what prosecutors have said would likely amount to evidence against Nashiri.

"The Eighth Amendment simply does not allow an accused to be put to death," he said, referring to the prohibition against cruel and unusual punishment.

On the prosecution side, Army Major Evan Seamone argued that under international law, as well as domestic, the death penalty has been applied to serious war crimes.

"Death would be available for these particularly egregious offenses," Seamone said.

A closed session will take place on Saturday in Guantanamo to review classified material in the case, according to U.S. Army Colonel Judge James Pohl. The open sessions will continue on Monday.

Experts believe that because the Nashiri case comes before a military court and involves the death penalty, it will set many precedents.

"They're going to see more litigation trying to parse out what it means to have a special military war court try complex, high-stakes capital terrorism cases," said Wells Bennett, fellow in National Security Law at the Brookings Institution. Bennett is also managing editor of the Lawfare blog where he is observing and blogging about the Guantanamo military commissions.