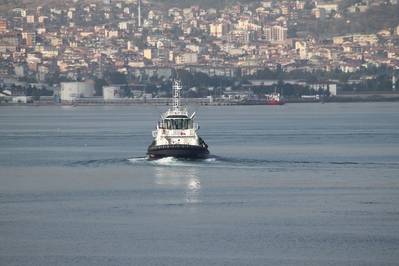 This is the first of a two boat order for the AVT 3000 Class Tugs designed by Robert Allan Ltd., Naval Architects of Vancouver, B.C., Canada.   The Media Luna will replace the Riohacha as part of a Cerrejón’s fleet renewal program.  The sister vessel Cabo del Vela is expected to be delivered to Cerrejón’s Puerto Bolivar marine operations in March of this year.

The AVT 3000 was designed to meet Cerrejón’s requirements for performance, propulsion equipment, accommodations, tank capacities and outfit.   She features a partial raised focsle for operation in rough weather and a large functional aft working deck for efficient ship handling operations.  Designed for a bollard pull of 60 tonnes, she will be the most powerful tug in the Puerto Bolivar fleet.

Particulars of the Media Luna are as follows:

The tug was designed and constructed to BV Class requirements with the notation: BV 1,  HULL,  MACH, TUG, Unrestricted Service'

On the foredeck is a Rolls Royce AW20.5U2H anchor windlass with two cable lifters and two horizontal warping heads.

On trials, Media Luna met or exceeded all performance expectations, with a bollard pull, ahead of 63.1 tonnes and a ree running speed of 13.6 knots.