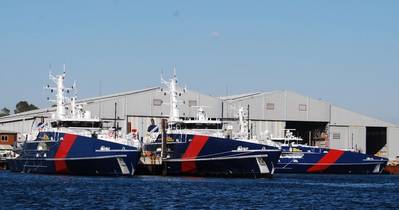 Austal Limited announced it has delivered Cape Leveque, the sixth of eight Cape Class Patrol Boats being supplied to the Australian Customs and Border Protection Service under a $330 million design, build and in-service support contract.

Cape Leveque is named after the northernmost tip of the Dampier Peninsula in the Kimberley region of Western Australia.
Austal Chief Executive Officer Andrew Bellamy said that with three quarters of the Cape Class fleet now delivered, Austal continued to demonstrate its credentials as a partner of choice for government defence vessel programs.
The remaining two Cape Class vessels are moving into the final stages of construction and will be delivered progressively through to late 2015, in line with the contract.