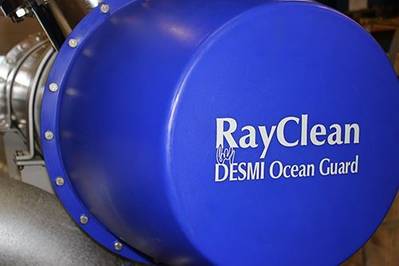 Even though DESMI is considering all options, a test program for the RayClean system has already been launched in order to demonstrate compliance with the FDA test method accepted by the USCG.
On July 13, 2016, the U.S. Coast Guard (USCG) announced its final decision to reject the MPN method for the verification of the performance of Ballast Water Treatment Systems (BWTS), meaning the already completed land based type approval testing of DESMI’s RayClean ballast water treatment system is not acceptable to the USCG, and must therefore be re-performed with the USCG accepted FDA method. The ongoing test program is taking place at DHI in Denmark and foreseen finalized in 2016.
DESMI Ocean Guard had in March 2015 submitted a Type Approval application to the USCG, where the MPN method had been used to verify the system performance. However, following an initial rejection of the MPN method by the USCG in December 2015 and appeals filed by several major manufacturers of UV based ballast water treatment systems in February 2016, USCG have now confirmed their rejection of the MPN method.
“Although we do not agree with the decision of the USCG we of course respect the authority of the USCG. We will continue to work on having the MPN method accepted also in the U.S. as it is everywhere else in the world, but in the meantime we must, for the sake of our customers, ensure USCG type approval of the RayClean system,” said Rasmus Folsø, CEO in DESMI Ocean Guard.“We will therefore perform the required additional testing with the FDA method to demonstrate compliance with the USCG rules. These tests have been planned and prepared during the spring and are now ongoing at DHI test facility in Denmark. We expect to finalize the land based testing this fall aiming for USCG type approval of the RayClean system late 2016.”
The RayClean Ballast Water Treatment is based on mechanical filtration and UV treatment. The system has received IMO, DNV-GL and ClassNK type approval, as well as AMS acceptance by the USCG, which is valid in all salinities ranging from freshwater to marine water. Moreover, the RayClean approvals contain no limitation with regard to temperature of the water to be treated, which makes it one of the most versatile and well suited systems to deal with any kind of water you can expect to encounter in global trade. Further, the RayClean system is also available in an ATEX certified version for installation in hazardous areas on tankers.
DESMI Ocean Guard develops and markets ballast water treatment systems for the removal of living organisms from ships' ballast water. DESMI Ocean Guard head office is located in Nørresundby, Denmark and is wholly owned by DESMI A/S. DESMI A/S has more than 180 years of history and today the main product is pumps and pumping systems for marine, industry and utility applications. Globally DESMI has 650+ employees in 30 locations in 17 countries.