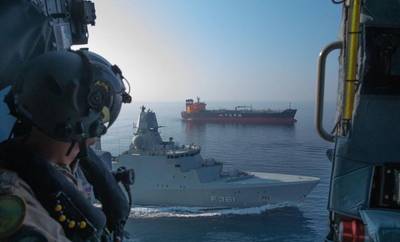 Danish Parliament on Tuesday approved plans to send a naval warship to boost maritime security in one of the world's top piracy hot spots.

In the fall of 2021 the European country will deploy its frigate Esbern Snare to the Gulf of Guinea off Africa's west coast where it will contribute to international efforts to curb rampant piracy.

In March, the Danish government expressed "serious concern" over the security situation—both for Danish and foreign ships and seafarers—in the Gulf of Guinea where around 40% of all pirate attacks reported worldwide take place. In 2020 alone, 135 crew were kidnapped from ships globally, with the Gulf of Guinea accounting for over 95% of the crew numbers kidnapped, according to shipping trade group BIMCO.

"In such a situation we cannot and shall not just watch. We must stand up for the right to free navigation," said Trine Bramsen, Danish Minister of Defense. "The Danish Navy has previously proved strong and important in the combating of the pirates. However, if we are really going to get the security under control in the Gulf of Guinea an international military presence is necessary. From the Danish side we try to have more countries taking a responsibility."

The 137.6-meter Absalon-class frigate HDMS Esbern Snare (F342) will initially be deployed in the Gulf's international waters from November through March to help deter piracy and escort Danish and international merchant shipping in the area. The warship will carry approximately 175 Danish Armed Forces personnel as well as a SEAHAWK helicopter, which, if necessary, could deploy special operation forces to carry out rescue missions on hijacked ships.

Danish Commander of the Navy, Rear Admiral Torben Mikkelsen, said, “It is a key task for the Danish Navy to contribute to free navigation and security at sea, and therefore I see it as very positive that our naval vessels with their skilled crews can contribute to international security. I know that the frigate is up to the task, and I am sure that the frigate can improve the situation for all active sailors and crews in the region.”

Minister of Foreign Affairs, Jeppe Kofod, said, "The Danish flag waving is a reliable sign of security and safety at sea. Due to the fact that Denmark undertakes the responsibility as a marine nation when the safety and the right to free navigation are threatened. And now we apply sharp measures against the pirates in the Gulf of Guinea both in terms of diplomatic and military contributions. We have also increased our stabilization efforts in the area cooperating with relevant coastal states. It is a matter of contributing to making the countries more able themselves to handle the safety so that we fight the pirate attacks as well as the causes for the pirate actions."

BIMCO, which has advocated for collaboration between Nigerian law enforcement and international navies for years, welcomed the move.

“While it is understandable that Nigeria does not want foreign navies in their territorial waters, we hope that Ambassador Horslund will be able to garner broad support for an antipiracy operation as mandated by the UNCLOS convention, i.e. in international waters just outside Nigeria’s 12 nautical mile limit,” said Jakob P. Larsen, BIMCO head of maritime safety and security.

“It is time for the international community to live up to the aspirations of the UNCLOS convention and suppress the piracy in the Gulf of Guinea, which affects seafarers and companies from all over the world. International navies is an indispensable addition to regional efforts such as Nigeria’s newly acquired Deep Blue capabilities which we hope will reach full operational capability soon,” Larsen said.

BIMCO estimates that two helicopter equipped frigates with robust antipiracy mandates, plus one maritime patrol aircraft working from a base ashore, will have a significant deterrent effect on the pirates operating in the Gulf of Guinea.