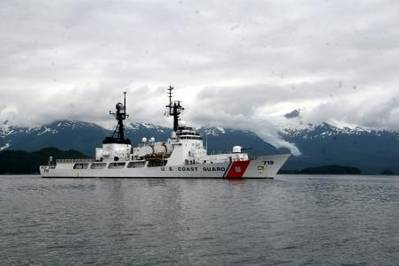 "Boutwell’s crew performed exceptionally throughout the deployment to Alaskan waters.  We patrolled the Maritime Boundary Line reminding the nearby foreign trawlers of our presence, conducted many fisheries boardings where more than 60 percent of the nation's seafood comes from, joined forces with the Alaskan State Police in enforcement actions, and prosecuted four long distance search and rescue cases with our embarked Alaskan helicopter detachment,” said Capt. Jim Munro, Boutwell’s commanding officer.  “This patrol was a great contrast to the counter-drug mission we routinely execute in the eastern Pacific equatorial waters, and broadened our already substantial mission area expertise.”

During their 92-day deployment, the Boutwell served as the sole Coast Guard search and rescue platform in the Bering Sea. The cutter’s crew conducted three medical evacuations and one successful search for a reported overdue boater.  One notable medevac involved a 28-year-old fisherman aboard the Alaska Spirit. The man was then transported to emergency medical personnel approximately 115 miles away by the Boutwell’s embarked helicopter.

An MH-65 Dolphin helicopter and aviation detachement from Coast Guard Air Station Kodiak, Alaska, deployed aboard the cutter during the patrol. The Coast Guard routinely stations a helicopter-equipped cutter in the Bering Sea to provide maximum area coverage for rescues, often out of reach of shore-based Coast Guard aircraft.

Boutwell’s crewmembers took part in various community relations events during the deployment including organizing a five-kilometer foot race during a port call in Adak, Alaska, and later invited the public of Juneau, Alaska, to tour the ship on Independence Day.

The 45-year-old Boutwell and the other Hamilton class, high-endurance cutters, are being replaced by the Legend class national security cutters (NSCs). The NCSs are better equipped, more durable, safer, and more efficient than their predecessor, and will allow the Coast Guard to deliver its unique blend of military capability, law enforcement authority, and lifesaving expertise wherever needed to protect American interests, today and for decades to come. Coast Guard Cutter Boutwell is a 378-foot high-endurance cutter homeported in San Diego, with a crew of approximately 160.