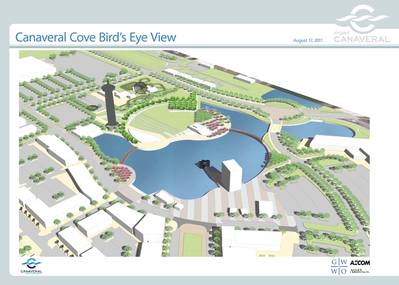 In an unanimous vote during its August Board meeting, the Canaveral Port Authority approved construction of a new Welcome Center and development of an entertainment district on the south-side of Port Canaveral. The $16.6 million Canaveral Cove project is scheduled for completion in June 2013.

GWWO, Inc. of Baltimore, Maryland, will design the 15,000-square foot Welcome Center. It will include exhibit areas, movie theater/auditorium, and offices. “We envision the Welcome Center and infrastructure improvements as a catalyst for private development on other property at the Port,” says Joe Matheny, Chairman of the Canaveral Port Authority Commission. “This dynamic plan is an investment in the Port that will pay dividends for the community in attracting more tourism.”

Bids for work related to the project, including road modifications, utilities, and landscaping will be awarded between March and July 2012. “The Commission has pressed the fast-forward button to transform Port Canaveral into the tourism and recreation destination that has been discussed since the early 80s,” says Stan Payne, CEO of Port Canaveral. “The economic activity that will be generated from bringing the vision to reality comes at a critical time for the Central Florida region and particularly for Brevard County with the end of the Space Shuttle program.  We now will move forward definitively and aggressively on Port Canaveral’s transformation.”

TUI Cruises said a second vessel in its cruise ship fleet has successfully tested the use of shore power in port.Earlier this week…