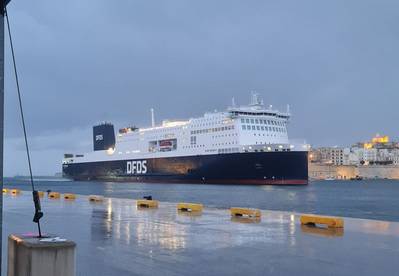 The new ship, Aura Seaways, is the first in a series of two new roll-on, roll-off passenger ferries built by GSI for DFDS. The 230-meter-long vessel, officially handed over to DFDS in China in December, is the first newbuild passenger vessel contracted by DFDS since Scandinavia was delivered in 1982.

Last weekend, the ship berthed in Malta to take on 20 crew members from Lithuania, as well as food, water and fuel supplies.

Vytautas Valteras, captain of Aura Seaways, said, “The trip from China to Lithuania is very exciting because it’s not very common for a vessel to go on such long voyages. The Gulf of Aden, Suez Canal, and Malacca Strait, such places are thrilling for every seaman.”

Aura Seaways is now on her way to Karlshamn in Sweden, where she is expected to arrive this weekend to test the berth facilities. Afterward, she will proceed to Klaipeda in Lithuania.

With 4,500 lane meters and capacity for 600 passengers, the new vessel is by far DFDS' largest RoPax ferry in terms of cargo capacity. And with a deadweight of around 12,750 tons, she can carry almost three times more than Scandinavia.

The scrubber-fitted Aura Seaways fulfils the new design standards of EEDI (Energy Efficiency Design Index), and the CO2 emissions per trailer are more than 20 % lower than on the vessels currently trading on the intended routes Karlshamn-Klaipeda and Kiel-Klaipeda, DFDS said.