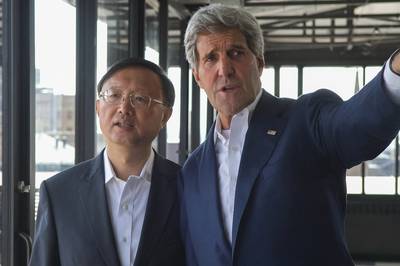 China's top diplomat will visit Vietnam next week, China said on Friday, five months after he last visited during a period of tension over a Chinese oil drilling rig working in part of the South China Sea both countries claim.
State Councillor Yang Jiechi, who outranks the foreign minister, will arrive in Vietnam on Monday for meetings with Vietnam Foreign Minister Pham Binh Minh, China's foreign ministry said in a statement.
The two would discuss "Sino-Vietnam bilateral cooperation", the ministry said. It did not elaborate.
Yang last went to Vietnam in June when he accused it of "hyping up" the row over the Chinese drilling rig in waters close to Vietnam but claimed by China.
The dispute lead to confrontation at sea between Chinese and Vietnamese government vessels and violent anti-Chinese protests in Vietnam, in one of the worst breakdowns in their relations since they fought a brief war in 1979.
Last week, Chinese and Vietnamese leaders met on the sidelines of an Asia-Europe summit in Italy and agreed to "address and control" maritime disputes.
Communist parties rule both countries and their trade has swelled to $50 billion annually, but Vietnam has long been suspicious of its giant neighbour, especially over China's claims to almost the entire South China Sea.
Ordinary Vietnamese are also quickly angered by any perceived bullying from China.
The Philippines, Malaysia, Brunei and Taiwan also have claims to parts of the potentially energy-rich waters, and China has looked on with suspicion at what it sees as U.S. moves to "provoke" tension by supporting its regional allies, such as the notably the Philippines, as well as Vietnam. (Reporting by Ben Blanchard; Editing by Robert Birsel)