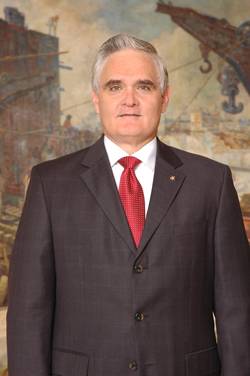 The Panama Canal Authority (ACP) Board of Directors announced today the appointment of engineer Jorge Luis Quijano as the new Panama Canal Administrator.  Mr. Quijano will succeed Alberto Alemán Zubieta, who has been at the helm of the Canal for the past 16 years and whose term will end on September 3, 2012.

“We are proud to announce the appointment of Jorge Quijano as the new Canal Administrator. The Board of Directors, as part of its legal duties and based on its autonomy, considers engineer Quijano to have the knowledge and experience needed to manage the waterway at this key moment in its history,” said Rómulo Roux, Board of Directors Chairman and Minister for Canal Affairs. According to Roux, “the Board of Directors completed this selection process through the elaboration of a specific chronogram which compiled the challenges of the Canal and its expansion.  Based upon this strategic planning process, the Board developed the profile of the new Administrator.”

“This decision was based on the responsibility and independence granted to the Board of Directors by the Constitution and the Organic Law of the Panama Canal Authority, as a way to preserve its institutionalism.  It reinforces the Board´s commitment to setting the direction of the organization in order to face future challenges, he added." Roux explained that Quijano will now begin a transition period with the guidance of Administrator Alberto Alemán Zubieta, to guarantee a smooth succession once he officially occupies the position beginning on September 4, 2012.