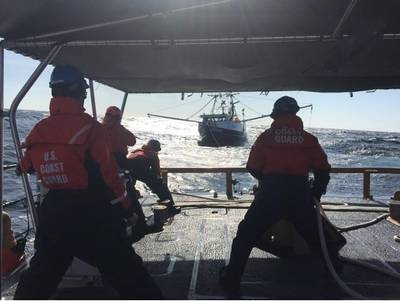 The vessel became disabled due to an engine casualty but still had power via an on-board generator. Commercial Salvage was initially contacted to tow vessel, but was unable to respond that far offshore.

The Sitkinak towed the Bookie to Montauk, N.Y. arriving at approximately 7 a.m. Monday. Coast Guard crewmembers aboard a 47-foot motor lifeboat took over tow and took the vessel to Fort Pond Bay, where it is safely anchored.

Fishing vessel Bookie has established a tow to take them back to Shinnecock.

No medical concerns were reported.