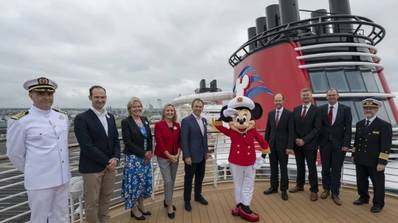 Disney Cruise Line has taken delivery of the 144,000 GT Disney Wish, its first new cruise ship in more than a decade.

The fifth ship in the Disney fleet, the liquefied natural gas (LNG)-fueled vessel was built by German shipyard Meyer Werft and officially handed over during a ceremony in Bremerhaven on Thursday. Disney Cruise Line president Thomas Mazloum and Meyer Werft managing director Jan Meyer signed the documents transferring ownership of the new cruise ship from the shipbuilder to Disney.

Following the ceremony, Captain Marco Nogara took the helm for the transatlantic voyage to the Disney Wish's homeport, Port Canaveral, Fla., where it will enter service sailing Caribbean itineraries starting this summer.

The 144,000 GT newbuild has 1,250 cabins, with room to accommodate at least 2,500 guests, and is the first in a series of three Triton Class cruise ships Meyer Werft is building for U.S.-based Disney Cruise Line. The series' second ship is expected to enter service in 2024, followed by the third in 2025.

The German shipyard previously built Disney's Dream Class vessels, Disney Dream and Disney Fantasy, delivered in 2010 and 2012 respectively. At the time, the 129,690 GT cruise ships were the largest ever built in Germany.