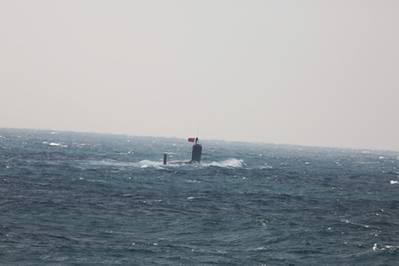 The submarine, which Japan detected in the East China Sea, was a 110 meter-long Shang-class vessel, which is able to dive deeper and for longer than older boats and is armed with torpedoes and anti-ship missiles, according to Japan’s Ministry of Defence.
“Operating a submerged submarine close to another country’s territory goes against the norms of international rules,” Minister of Defence Itsunori Onodera told reporters.
While Chinese surface vessels often operate near Japanese islands on the edge of the East China Sea, the presence of a concealed submarine is viewed as a far more serious threat by Japan, which worries that China is flexing its military muscle in the waters that lead to the western Pacific as it consolidates control over the neighboring South China Sea.
The contested uninhabited islands in the East China Sea are known as the Senkaku in Japan, which controls them, and Diaoyu in China.
The Japanese criticism comes after Asia’s two biggest economies had pledged to improve ties.
Japan’s Chief Cabinet Secretary Yoshihide Suga, who last week protested against the presence of the submarine and other Chinese navy ships near the disputed islands, described the presence of three Chinese coastguard vessels in the waters on Monday as “regrettable”.
Chinese foreign ministry spokesman Lu Kang told a regular news briefing that he was not aware of the details regarding the submarine, but that China would not accept Japan’s “representations” on the issue of the islands.
“The Diaoyu islands and associated islets are China’s sovereign territory,” he said.
(Reporting by Tim Kelly; Additional reporting by Michael Martina; Editing by Robert Birsel)