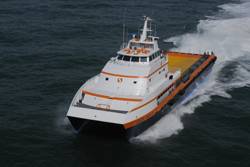 More than a decade ago, deepwater oil production in the Gulf of Mexico surpassed shallow water output for the first time ever. These days, rigs are found hundreds of miles offshore. Companies need to get equipment, employees, fuel and mud to those sites economically and usually on a tight schedule. Gulf marine companies are trying to meet those requirements by increasing the speed, size and energy efficiency of their vessels--though not necessarily all at once.

Shane Guidry, Chief Executive Officer of Harvey Gulf International Marine, LLC in New Orleans, pointed to constraints in making supply boats any speedier. “Work boats can't become faster and lighter because they're made of steel,” he said. “As they get larger, wider and deeper, they don't get faster.”

Crew boats are getting longer and faster, Guidry said. “However, a 220-foot-long crew boat uses 13,000 gallons of diesel fuel per day at $3.40 a gallon. At a fuel-operating cost of $45,000 a day, that doesn't make financial sense.” He said  instead of employing one long crew boat, a company can use two supply boats--one out at the oil rig and one at the dock--to be more cost effective. He added “that's why we haven't looked at building any long crew boats." Guidry continued, saying “Supply boats can become more cost effective by being built longer. Some of the long supply boats we're building will be more energy efficient.” He said the initial price tag of his company's new, liquefied natural gas or LNG-fueled supply boats is 20 percent higher, but over time, he will amortize some of that additional cost in fuel savings.

At SEACOR Marine in Houma, La., project manager Joe McCall said “big offshore oil producers all use crew and supply boats and helicopters to transport staff and cargo.” SEACOR Marine has 50 crew and fast support vessels in its fleet. “To make crew boats faster, you need to increase their horsepower, optimize the hull design, choose the appropriate propulsion equipment, and increase the strength of the hull structure--while seeking ways to keep vessel weight at a minimum,” he said. SEACOR works with vessel designers, the shipyard that builds its boats and equipment suppliers to achieve efficient combinations.

SEACOR's crewboat, the M/V RJ Coco McCall, working out of Port Fourchon, was built by Gulf Craft in Patterson, La. and delivered this year.  The vessel is an example of a mono-hull design with increased horsepower as compared with most crewboats, McCall said. The 165-foot RJ Coco McCall reaches speeds exceeding 30 knots, even when carrying large cargoes, he noted.

One of the company's fastest crew boats is the M/V SEACOR Cheetah, a 170-foot catamaran delivered by Gulf Craft in March 2008 and working off the West African coast. “With its twin-hull design, the Cheetah can reach speeds of 42 knots, or more than twice that of conventional, mono-hull crew boats,” McCall said. “Another advantage is its stable work deck, which in high, choppy seas or bad weather, makes the ride safer and more comfortable.” The CrewZer Class Cheetah is a fast crew-supply vessel, holding up to 150 passengers.

“The Cheetah has four MTU 16V 4000 M71 engines rated at 3305 hp,” McCall said. “Its high horsepower engines allow the vessel to achieve very high speeds when carrying time-critical cargoes. When cargoes are not as urgent, the Cheetah can cruise at an economical speed of 30 knots. The vessel has a fuel capacity of 26,722 gallons and can carry 182 long tons of deadweight.”

McCall said the SEACOR Cougar, working in the Caspian Sea, is a double-hulled catamaran--built by Gulf Craft and delivered to SEACOR in 2010. It's a sister ship to the Cheetah. The Cougar is fitted with MTU 16 V 4000 engines, rated at 3435 HP each. The Cheetah, the Cougar and the Coco McCall all have water-jet propulsion systems, he said. SEACOR is currently working on new and innovative concepts to further advance fast, crew boat technology," McCall said.
Meanwhile, SEACOR Holdings Inc., the parent company of SEACOR Marine, operates a helicopter company. “In the Gulf, both helicopters and fast crewboats are used to transport offshore workers to drilling rigs and platforms,” McCall noted.. “Typically, passengers are transported to the structures near shore by crewboats, and they travel by helicopter when the structures are more distant.”

But he said “as a general rule, more people are moved by helicopters to rigs in the Gulf of Mexico, whereas in deepwater operations overseas--in West Africa for example--companies use crew boats more. Customers decide what's right for them, depending on the situation, the rig's distance from shore and the amount of time they have.” Weather, the number of people traveling and availability of equipment also determine whether crew boats or helicopters are used.
“In a hurricane event, companies employ crew boats and helicopters because lots of personnel have to be moved ashore quickly,” McCall said. SEACOR Marine, he added, is one of the largest transporters of offshore staff in the Gulf of Mexico.

As for catamaran usage, “there's more demand internationally than there is in the Gulf, both pre and post last year's Gulf oil spill,” McCall said. “Catamarans are fast but they have less cargo capacity than mono-hulls, which aren't as fast.” He said rig operators in the Gulf tend to prefer monohulls but use them more for transporting cargo than passenger service. “In foreign markets, however, passenger service is the primary role and cargo is secondary,” he said. “Catamarans are in greater demand outside the U.S.”

A four-year, U.S. Bureau of Ocean Energy Management study, conducted by Louisiana State University's Coastal Marine Institute to analyze demand for support vessels and helicopters in the GOM, will be complete in 2012, BOEM said in late October. The $344,053 study aims to develop  methods and equations to forecast trips to offshore oil-and-gas exploration and development sites, according to the agency.

Joe Bennett, Executive Vice President and Chief Investor Relations Officer at New Orleans-based Tidewater Inc., said “we have approximately fifteen, fast, 170-foot crew boats, with one still under construction. But crew boats have always been a relatively small part of our business.” Tidewater's emphasis in recent years has been on towing supply vessels and larger, deep water supply boats. “We don't have any 170-foot crew boats currently working in the Gulf of Mexico, and our fleet of fifteen or so is spread in various international areas," McCall said.

“As for supply boats--important in loading and unloading cargo--they're get longer and longer,” he said. “They used to be 180 feet, but are now as long as 280 or 300 feet. They can carry large loads of cargo, both on the back deck and in tanks underneath.” However, he said “the speed of these larger supply vessels isn't terribly different from their predecessor, 180-foot versions." In the last decade or so, Tidewater vessels have been built mainly in foreign shipyards, and a few have come from the company's wholly-owned subsidiary, Quality Shipyards, L.L.C in Houma, La. Tidewater owns 350 vessels, making it one of the world's largest fleets serving the offshore energy industry.

Oil company activity remains sluggish in the U.S. Gulf because of slow, federal permitting of wells, even though the drilling moratorium--imposed during the BP spill--ended a year ago. Offshore prospects are brighter globally, however.
A staff paper titled “The History of Offshore Oil and Gas in the United States,” prepared for the National Commission on the BP Deepwater Horizon Oil Spill and released earlier this year, said “the march of innovation into ever-deeper waters and new geological environments offshore is already one of the most important stories in the history of the oil business. The largest additions to world hydrocarbon reserves and production during the next several decades will likely come from offshore, and increasingly from deep water beyond 1,000-foot depths.”

The need for offshore vessels that are either bigger, faster, more energy efficient or any combination thereof is likely to grow, industry members said. That demand can be supplied by firms in the U.S. Gulf--where offshore service dates back to the region's initial, 1937 Creole Field discovery off of Louisiana's coast. The U.S. Gulf supplies 30 percent of the nation's oil and gas production.

Susan Buchanan is a New Orleans-based business writer, specializing in energy, maritime matters, agriculture, the environment and construction. She holds a master's degree from Cornell University in agricultural economics and an undergraduate degree from the University of Pennsylvania.