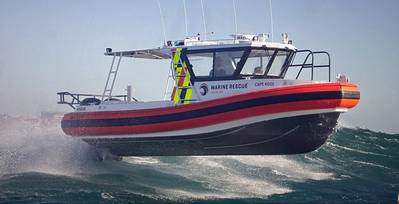 The first newbuild rigid inflatable boat (RIB) built by Dongara Marine has entered into service, heralding a raft of government and RIB contracts for the Western Australian boatbuilder.

The newbuild, Cape Rose, was completed at the end of last year and has been operating for Marine Rescue Shark Bay since delivery to Denham in early in 2021. It has replaced a response vessel that had serviced the Western Australia (WA) coastline for more than 20 years, both with the group and previously with WA Water Police.

Construction of the new vessel was funded and overseen by WA’s Department of Fire and Emergency Services (DFES) as part of the WA Government’s $19.5 million investment in the state's Marine Rescue groups which is funded from the Emergency Services Levy. Dongara Marine is one of five boatbuilders that qualified to be on DFES’s panel of contractors for the supply of new rescue vessels and vessel refit services.

The 8.3-meter Southerly Designs rescue craft combines an aluminum hull with a D-section collar manufactured and installed by West RIBs. The collar consists of polyethylene foam laser cut to suit the gunnel shape, with a Polymar outer and PVC rubbing strip.

Custom designed and built to specific DFES and Marine Rescue Shark Bay requirements, Cape Rose is a high volume boat, much bigger than is typically associated with a RIB of this length.

It features an enclosed cabin with seating for three crew including Shockwave suspension seats for the helm and navigator’s positions. The cabin sides extend well aft of these positions to provide shelter from the elements, but feature sliding Windows West windows to enable seated personnel to easily converse with people on other boats. Fold-down ladders are fitted on each side to provide ease of access to and from the water.

The cabin is open at the rear, enabling direct access to the work deck, which is sheltered by a solid canopy. A heavy-duty tow post is incorporated into the structure aft, where a bench seat is also fitted.

Accessed through a centerline passage through the wheelhouse console, the forward cabin is primarily arranged for storage but includes a refrigerator.

Southerly Designs’ larger vessels have long had a reputation as excellent sea boats, and although smaller, the new RIB is no exception.

Based on a proven parent hullform used in large numbers by military and rescue organizations in Southeast Asia, the Cape Rose design features increased hull vee and a deeper, extended forefoot to provide enhanced seakeeping as required for operations in Indian Ocean conditions off the Western Australian coast. Zipwake KB-450 interceptors are fitted to provide dynamic trim control.

“Being deeper and finer forward, the boat is less prone to bottom and chine slamming than would otherwise be the case,” said Rohan Warr, Dongara Marine’s Managing Director. He also noted that the resultant longer deceleration also contributes to a smoother rider.

“Having driven a number of RIBs and other small craft of various designs over the years, another standout aspect of Cape Rose for me was its assured handling, including at high speed,” said Warr who, in addition to being a qualified shipwright, has worked as a professional skipper.

“The boat tracks very well, requiring very little steering input to stay on course. In addition at top speed we didn’t experience the unstable ‘flighty’ feeling that some boats get and which can be unnerving even for experienced skippers,” he added.

For a comparatively small vessel, the rescue craft has a comprehensive suite of navigation and communications electronics. These were supplied, integrated and installed by another long-term Dongara Marine supplier, Geraldton Marine Electronics.

“After starting the Cape Rose build we received a number of separate enquiries for RIBs,” Warr said. “As a result we now have firm contracts to build another three RIBs which are at varying stages of construction.”

Those projects are a 7-meter boat contracted by DFES for Marine Rescue Jurien Bay and two larger waterjet-propelled RIBs for undisclosed buyers.