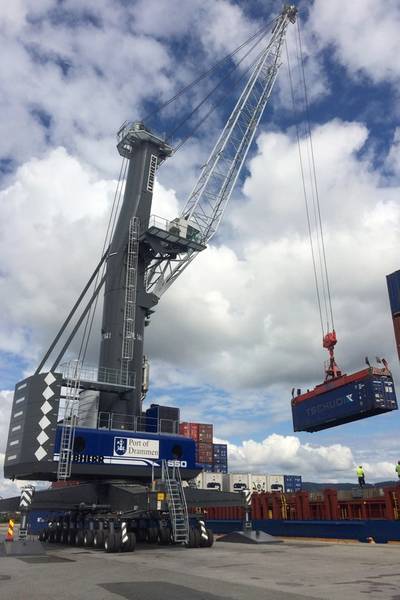 Thanks to this new investment, Port of Drammen has doubled its container handling capacity. Additionally, the versatile LHM 550 is also capable of efficient bulk, general cargo and heavy lift operation. The crane provides a lifting capacity of 144 metric tons, which means over 40 tonnes more than the strongest of the existing machines in the port.

Liebherr Pactronic allows for eco-friendly performance boost
The new crane is equipped with Liebherr’s Pactronic hybrid drive system. Awarded with the State Prize Clean Technology Austria, this cutting-edge hydraulic hybrid drive for cranes is the first to achieve increased handling performance with reduced fuel consumption. By adding an accumulator as a secondary energy source instead of a bigger or additional prime mover, Pactronic is regenerating the reverse power while lowering the load. In addition, the surplus power of the primary energy source is also used for charging the accumulator. The stored energy is transferred back to the system when the crane requires peak power during hoisting. In terms of turnover capacity, that means a plus of 30% compared to a conventional machine with equal power rating of the primary energy source. In addition, Pactronic leads to a reduction of fuel/energy consumption (litre/ton) as well as CO2 and exhaust emissions in the range of 30% depending on the operation. The hybrid drive system is virtually maintenance free as it  just needs visible inspection every 10 years. 100% recyclability as well as less noise exposure are additional eco-friendly benefits of the system.

Setting the course for future growth
Located southwest of the Norwegian capital Oslo, Port of Drammen required more capacity as it saw a 30% container volume increase between 2012 and 2013. In 2013, more than 30,000 containers were handled throughout the year. This investment in additional cargo handling capacity is important for the regional economy. Goods handled in the port include spares, furniture, electronics, wine and food.

“We are experiencing a significant container traffic increase in Drammen. Due to the LHM 550 we have sufficient capacity to smoothly handle current container volumes. Moreover, we have capacity available for future growth,” said Einar Olsen, Port Director.

The new mobile harbor crane is also expected to attract new business, as Port of Drammen has expanded its heavy cargo portfolio to lifts of up to 144 metric tons. High lifting capacity is of special importance to the subsea industry and due to the new crane Port of Drammen has boosted its competitiveness in this regard.