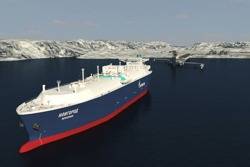 The vessels are currently under construction at STX Offshore & Shipbuilding in South Korea and will each be driven by sets of two 8L and two 9L51/60DF engines. The engines will be built at MAN Diesel & Turbo’s Augsburg plant in Germany with delivery to the Korean yard due in the fourth quarter of 2012. The first vessel is subsequently expected to commence commercial operation in the fourth quarter of 2013.

The first 51/60DF order for a marine application was signed in 2007 for an LNG Carrier – ‘Castillo de Santisteban’ – with five 8L51/60DF units owned by Spanish shipowner Empresa Naviera Elcano S.A., the globally active Spanish shipping group. This vessel has successfully operated commercially since summer 2010 in the transport of LNG worldwide.