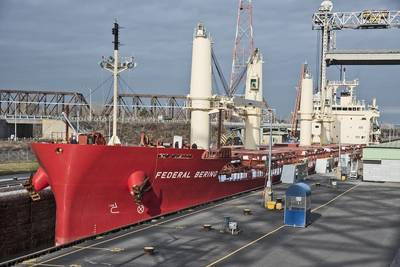 One of six newly-built bulk carriers in the Fednav fleet, the Federal Bering, is making its first full transit of the Great Lakes St. Lawrence Seaway system this week en route to the Port of Duluth-Superior. While this will be a first for the ship, its cargo will end up being the last outbound grain shipment of the 2015 shipping season for the Twin Ports.
Federal Bering is expected to arrive late Sunday evening, December 13, or early Monday morning, December 14. The ship is scheduled to take on a split load of some 21,000 metric tons of wheat and canola at the CHS terminal in Superior before departing midweek (weather permitting) for Mexico. Local vessel agent is Daniel’s Shipping Services, a company that’s served in that capacity for nearly 50 years.
Like her fleetmates – the Federal Baltic, Federal Beaufort, Federal Barents, Federal Bristol and Federal Biscay – the Federal Bering was built by Oshima Shipbuilding in Japan. All six sister ships are 199.98 meters in length and have a beam of 23.76 meters; each was built with four deck cranes and four “box” holds for greater flexibility. The vessels reportedly consume 28 percent less fuel and produce 28 percent fewer emissions than similar ships built for the company 10 years ago; their fuel-efficient engines will also reduce nitrogen oxide emissions by over 30 percent. All six new-builds were delivered between May and November 2015, as part of a series of 27 new ships added to Fednav’s fleet in the past four years, 14 of which are committed to Great Lakes-Seaway service.