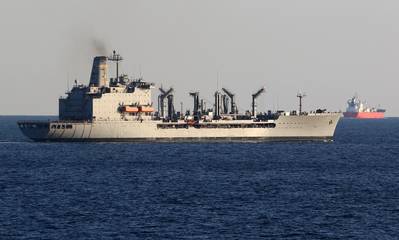 East Coast Repair has been awarded a contract for an 85-calendar day shipyard availability for the mid-term availability of the Military Sealift Command’s (MSC) fleet oiler USNS Leroy Grumman (T-AO 195), the U.S. Department of Defense announced.

Work will be performed in the company's Portsmouth, Va. shipyard, and will begin January 5, 2022, and is expected to be completed by March 31, 2022.

This $8,719,597 firm-fixed-price contract includes a base period and four options which, if exercised would bring the cumulative value of this contract to $9,006,443. Working capital funds (Navy) in the amount of $8,719,597 are obligated for fiscal 2022 and will not expire at the end of the fiscal year.

This contract was a small business set-aside with proposals solicited via the Government Point of Entry website and six offers received. The Navy’s MSC, Norfolk, Va., is the contracting activity (N3220522C4198).

USNS Leroy Grumman (T-AO 195) is a 206.5-meter Henry J. Kaiser-class replenishment oiler built by Avondale Shipyard in New Orleans and in service since 1989. It is used to provide underway replenishment of fuel to U.S. Navy combat ships and jet fuel for aircraft aboard aircraft carriers at sea.