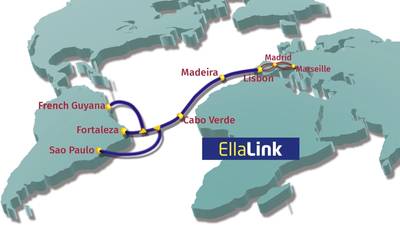 The survey will be performed over the coming months and permit acquisition continues in line with EllaLink’s plans to be Ready for Service by the end of 2020.

EllaLink is a 4 fiber pair submarine cable system designed to satisfy the growing demand for traffic between Europe and Latin America. The low latency EllaLink route avoids the congestion of the North Atlantic by offering the first ever direct fiber pair between the two continents.

“We are delighted to have appointed Alcatel Submarine Networks to undertake the marine survey and permitting work for the EllaLink cable system. The survey will collect vital data for the project, helping us determine the most effective route between Sines and Fortaleza, from a reliability, environmental and economic point of view. The launch of the permitting and survey work is also a significant step towards meeting our plans for lighting the system by close 2020,” commented Philippe Dumont, CEO of the EllaLink Group.

Alcatel Submarine Networks, part of Nokia, leads the industry in terms of transmission capacity and installed base with more than 600,000 km of optical submarine systems deployed worldwide, enough to circumnavigate the globe 15 times.