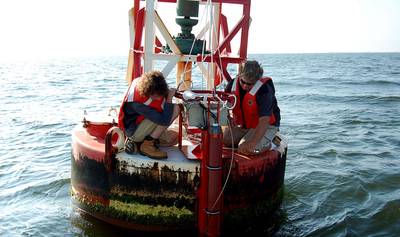 Navigating into seaports is now safer and more efficient for mariners thanks to improved NOAA technology that ships rely on to give them information about currents. The Center for Operational Oceanographic Products and Services (CO-OPS) developed a more reliable, cost-saving version of a current sensor system that can now be placed at more remote locations along navigation channels.

The updated Acoustic Doppler Current Profiler (ADCP) system provides real-time current speed and direction observations where many mariners need it most—at U.S. Coast Guard Aids-to-Navigation (ATON) buoys along major shipping channels. Accurate information about ocean conditions helps ship operators protect their cargo and the environment as they navigate narrow channels with increasingly larger vessels.
More than a decade ago, CO-OPS heard customer requests for tidal current data near navigation channels and developed a real-time current measurement system for placement on ATON buoys as an enhancement to the PORTS program. At the time, the new system marked an important step forward for delivering current data to users. The buoy-mounted ADCPs used a radio link for data transmission, whereas more traditional seafloor bottom-mounted sensors used communication cable tethers that limited where they could go, were vulnerable to being snagged by anchors, and were costly to install and repair.
Solving a Technology Challenge
In late 2014, CO-OPS engineers were challenged to design, develop, and test an improved version of the current sensor system in use at 24 sites in nine PORTS locations across the nation. The new version had to be more reliable, since several stations were experiencing data transmission issues, and it had to be simpler to install and maintain.
The team designed and developed a prototype ADCP system consisting of a single buoy-mounted component that automatically transmits data using real-time telemetry via an Iridium satellite. The new approach eliminates the less reliable radio communications link and the entire data-receiving shore station employed by the old system.
Together, these improvements will reduce costs for PORTS partners by an estimated one-third or more. The satellite transmission also does not have a range limit, so current sensors can be placed on virtually any ATON buoy where ship operators need information, allowing them to be placed on ATONs further offshore than before.
In May 2016, following a year of successful field trials, CO-OPS placed a new system at an operational ATON buoy of the South Chesapeake Bay PORTS in Virginia. The field demonstration will likely last through the fall of 2016 before the system becomes fully operational.

Glosten and ABB have teamed to develop a methanol-hybrid ship assist tug design. The "SA-100" is a 100-ft. ASD harbor tug…