NAVSEA Completes Waterjet Seal and Evaluation on USS Fort Worth 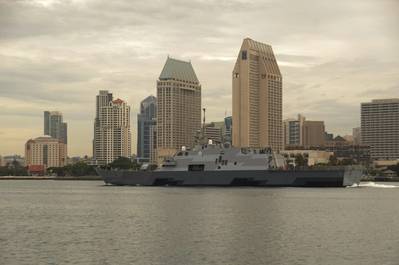 LCS class ships are unique to the U.S. Navy because they use waterjets instead of propellers for propulsion. Each waterjet draws seawater in through a duct, increases the water's pressure and then ejects it, causing the ship to move.

To protect these waterjets from internal corrosion, the LCS class uses what's known as a cathodic protection system, a system by which the waterjets are equipped with sacrificial metal structures that are specifically designed to corrode. Because these structures - known as anodes - corrode so easily, it keeps the rest of the waterjet structure safe from rusting or pitting.

On Freedom-variant ships, the anodes installed on the waterjets need to be inspected and replaced every four months. NAVSEA's Supervisor of Salvage and Diving (SUPSALV) was tasked to develop a procedure to replace these anodes at sea, instead of having to conduct the replacement in a dry dock.

Working with the ship's operators and the in-service LCS program office, SUPSALV engineers developed a plate to seal the waterjet inlet, as well as external patches to isolate the waterjet, creating a dry environment. This allowed maintenance teams to inspect and replace the zinc anodes while the ship was waterborne.

"It is important to have this underwater process to provide a cost effective, timely and manageable procedure to the LCS fleet," said Joe Theodorou, SUPSALV program manager. "Having this capability saves the Navy $100 million in drydock costs in the San Diego area."

With the procedure complete for Freedom-variant littoral combat ships, SUPSALV will begin testing a similar process for Independence-variant ships. Though both variants use waterjets for propulsion, there are significant differences in their design. Testing on Independence variant ships is expected to complete by March 2014.

The Office of the Director of Ocean Engineering, Supervisor of Salvage and Diving is part of the Naval Sea Systems Command and is responsible for all aspects of ocean engineering, including salvage, in-water ship repair, contracting, towing, diving safety and equipment maintenance and procurement.