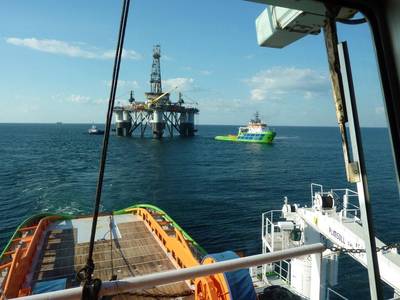 Upon completion of this project she was prepared in Rotterdam for the towage of rig Noble Max Smith and mobilized just in time for the departure from Pascagoula.

The Noble Max Smith is a semi-submersible drilling rig owned by Noble Corporation and contracted by Shell for a drilling campaign offshore Brazil over a three year period. Prior to this the rig was prepared at a shipyard in Pascagoula Mississippi, USA.

Upon readiness of the rig, a departure meeting was held and the Fairmount Sherpa and Fairmount Expedition connected their towing wires to Noble Max Smith one by one. After this the convoy began its 5,500miles journey to Niterói, Brazil.

First the convoy set sail towards Bridgetown, Barbados, for a stop-over for replenishment of the tugs and the rig. The tugs received first their bunkers and fresh provisions and secondly the Noble Max Smith received fresh provisions and stores. For this both Fairmount Sherpa and Fairmount Expedition were used. As such they did multiple cargo runs to and from the Noble Max Smith.

Not only during the first part of the voyage to Bridgetown, but also during a large part of the second leg of the journey counter currents were experienced. Nonetheless the Fairmount Class tugs showed there unbridled towing power and endurance. As such the Noble Max Smith was safely delivered in Niterói. Upon arrival offshore Niterói. Fairmount Expedition assisted with mooring of the rig into her position. Directly after delivery tugs Fairmount Sherpa and Fairmount Expedition were prepared for their next assignments.