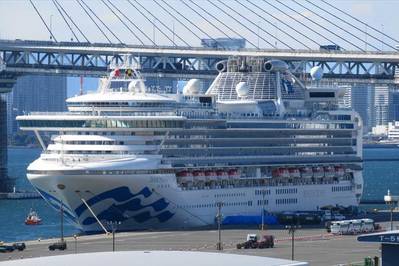 Philippine citizens infected with coronavirus on cruise ship rises to 80, others fly home

The Philippines said on Tuesday that the number of its citizens who had tested positive for the coronavirus on a cruise ship docked in a Japanese port had risen to 80, as 400 others arrived back home.

The Philippines’ Department of Foreign Affairs said in a statement that 80 Filipinos who had been on board the cruise ship Diamond Princess had been admitted to hospitals in Japan after testing positive for the virus. That was up from 59 reported on Monday.

More than 400 other Philippine citizens arrived at Clark airbase late on Tuesday night on two Philippine Airlines’ aircraft chartered by the government, after spending over three weeks quarantined on the ship in the Japanese port of Yokohama.

They will be subjected to a further 14-day quarantine, the foreign ministry said.

The Diamond Princess has been quarantined since docking in the Japanese port of Yokohama on Feb. 3 after a man who disembarked in Hong Kong before it traveled to Japan was diagnosed with the coronavirus.

Only seven of 538 Filipinos onboard on the cruise ship were passengers, according to the ministry, the rest were crew members.

The ship is owned by Carnival Corp and was originally carrying 3,700 passengers and crew representing more than a dozen nationalities.

Other countries including the United States, Hong Kong and South Korea have already flown their citizens home from the cruise ship to undergo additional quarantines.

Excluding on the cruise ship, the Philippines has confirmed three cases of the coronavirus at home, all Chinese nationals, including a 44-year-old man who died. He had traveled from the city of Wuhan in China, the epicenter of the outbreak.