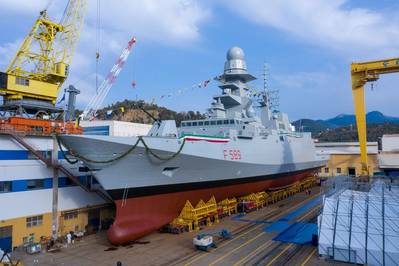 The ship has been launched with the combat system and platform equipment already installed onboard and fully integrated. She will now be moved to the Fincantieri‘s shipyard in Muggiano (La Spezia) where, within next June, sea trials will start to test her performances.

The ship will be delivered to the Italian Navy in March 2020, after the completion of the last outfitting activities.

The 10 vessels have been commissioned to Fincantieri by the Italian Navy within the framework of an Italo-French cooperation program under the coordination of OCCAR (Organisation Conjointe de Cooperation sur l'Armement, the international organization for cooperation on arms).

For Fincantieri the President Giampiero Massolo welcome, on behalf of the Chief of Defence, General Enzo Vecciarelli, the Chief of Staff of the Italian Navy, Admiral Giuseppe Cavo Dragone, the Governor of the Liguria Region Giovanni Toti, in addition to a number of authorities.

The vessel is 144 meters long with a beam of 19.7 meters and has a displacement of approximately 6,700 tonnes at full load. It has a maximum speed of over 27 knots and will provide accommodation for a 200-person crew.

The warship has been named after Emilio Bianchi, an Italian military frogman during World War II.