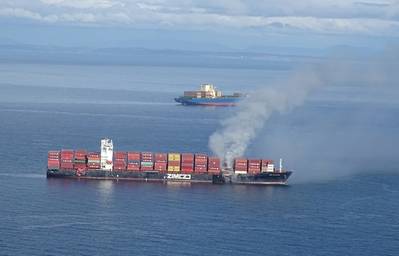 A container fire that broke out on Saturday on a cargo ship carrying mining chemicals off British Columbia is smoldering and appears to be under control, Canadian Coast Guard officials said on Sunday.

Sixteen crew members were evacuated from the MV Zim Kingston on Saturday, while five remained onboard to fight the fire.

The ship is anchored several kilometers off the southern coast of Vancouver Island. Residents of the island are not in danger, officials said, and transit of commercial vessels to the ports of Vancouver and Seattle ports is unimpeded.

Canadian Coast Guard Commander JJ Brickett said the company has indicated that the fire has burned itself out. Tug boats had sprayed water around the area of the fire to keep it from spreading, and a helicopter flyover on Sunday gathered evidence that this has worked.

"We can't see any scorching or charring of those adjacent containers, that's a really good sign," Brickett said. "The fire is smoldering as you would expect, and we're continuing to cool on either side."

Earlier on Sunday Danaos Shipping Co, the company that manages the container ship, said in a statement that no injuries had been reported.

The fire "appears to have been contained," and a salvage and fire extinguishing agency was brought in to ensure the safe return of the vessel's crew, Danaos said.

The mishap comes as more bad weather is expected to hit the area on Sunday and amid a global shipping traffic jam that has held up deliveries all over the world.

The ship is expected to weather the storm from its anchor, but tug boats are standing by and monitoring in case the ship were to move, Brickett said.

Canada's coast guard said it has been working with its U.S. counterpart to track 40 containers that had fallen overboard when Zim Kingston encountered bad weather on Friday, saying they posed a significant risk to mariners.

The coast guard is still tracking these containers, which are to be recovered by the salvage company hired by the ship's owners. At the moment none of them seem to be drifting toward shore, Brickett said.

"Mariners are advised to stay clear of the area. Currently there is no safety risk to people on shore, however the situation will continue to be monitored," the coast guard said on Saturday, when video obtained by Reuters showed fire cascading down from the deck of the ship into the water. 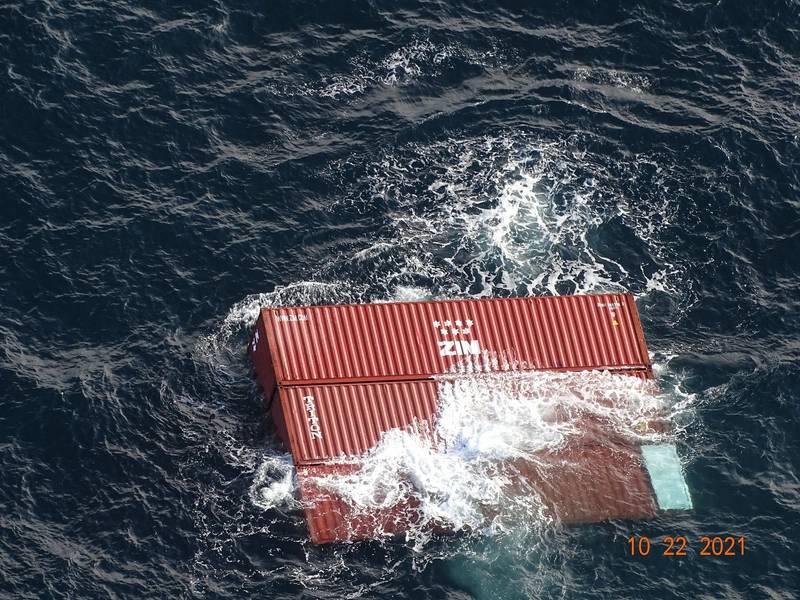 Containership Zim Kingston lost dozens of containers in the water of the Strait of Juan de Fuca, Friday, Oct. 22, 2021. The Zim Kingston was traveling to Vancouver, British Columbia, when it listed 35 degrees in heavy weather resulting in the loss of 40 containers. (Photo: U.S. Coast Guard)