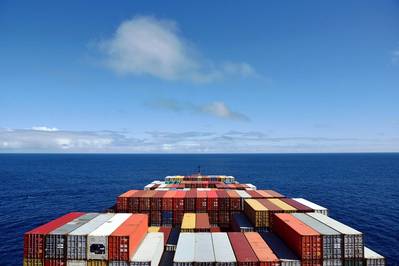 The world's largest container shipping lessor Seaspan Corporation announced on Monday that it has accepted delivery of a new containership that will immediately begin an 18-year charter with a "major liner customer". The vessel is the first in a series of five 12,200 TEU newbuilds and the lead ship of 70 newbuilds announced by Seaspan.

"This delivery marks a major milestone in Seaspan's continuing quality growth and unmatched ability to best serve our customers," said Bing Chen, chairman, president and CEO of Seaspan, a wholly owned subsidiary of Atlas Corp. "About two months ahead of the scheduled delivery during a global pandemic is testament to how Seaspan creates value for our customers in a current vessel shortage market. I'm proud of our team's supreme execution working with the logistical restrictions and our shipyard's prioritizing of their limited resources to facilitate early delivery of this best-in-class vessel. This further demonstrates the capabilities of our fully integrated platform and resilient business model within the global logistics market."

Seaspan has been on a newbuild ordering spree amid continued high demand, vessel shortages and record earnings in the container shipping sector. Just last week the company ordered 10 scrubber-fitted 7,000 TEU newbuilds for scheduled delivery from 2024. Since November 2020, Seaspan has announced investments for 70 newbuild containerships ranging from 7,000 TEU to 24,000 TEU. The newbuilds represent the addition of 839,000 TEU, which will add over $11 billion of gross contracted cash flows and bring the fully delivered fleet to 1,959,200 TEU.

The chart below summarizes newbuild vessels which Seaspan has announced but has not yet received delivery of: