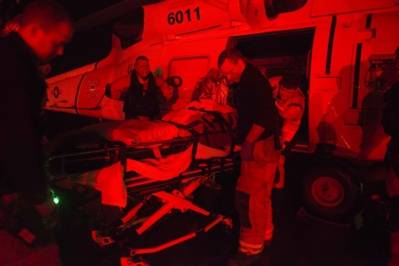 A U.S. Coast Guard Air Station Kodiak MH-60 Jayhawk helicopter crew medevaced an ailing fisherman from the fishing vessel Irene H in the Shelikof Strait near Kodiak Island Tuesday.
The Jayhawk crew rendezvoused with the Irene H, safely hoisted the man aboard the helicopter and transported him to awaiting emergency medical services in Kodiak for further care.
Coast Guard 17th District command center watchstanders received a request for assistance from the crew of Irene H when the fisherman aboard the vessel reportedly suffered an abdominal injury while pulling in crab pots and required medical assistance. The duty flight surgeon recommended the medevac and the Jayhawk crew was launched to conduct the rescue.
"The operation was challenging from the start," said Lt. Greg Dahl, pilot of the Jayhawk. "The dynamic weather conditions made for a rough ride but once on scene, the captain and crew of the vessel were very cooperative which enabled us to smoothly execute a successful rescue."
Weather on scene at the time of the incident was reported as 25 mph winds and 7-foot seas.