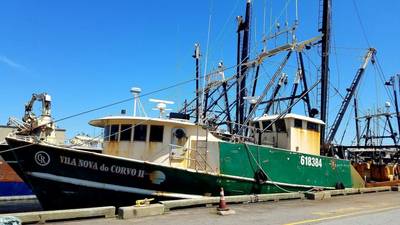 This is the Vila Nova do Corvo II moored up in Leonard's Wharf on Friday, Aug. 9, 2019 in New Bedford, Massachusetts. The company Vila Nova do Corvo II, Inc., company managers Carlos Rafael and Stephanie Rafael DeMello, and vessel captain Carlos Pereira agreed to pay a total of $511,000 in civil penalties and to perform vessel improvements after the United Station filed complaints alleging to violations of the Clean Water Act, discovered during Coast Guard boarding operations. (U.S. Coast Guard

The United States filed the complaint in this action in April 2019 in the U.S. District Court for the District of Massachusetts. The United States alleged the company and individuals, all based out of New Bedford, are liable for violations of the Clean Water Act related to the operations of the Vila Nova do Corvo II in coastal waters off of southeastern New England. The complaint addresses overboard discharges of oily bilge waste from the vessel while at sea harvesting scallops and the discharge of used oil filters into the sea. The complaint also includes a claim for violations of the Coast Guard’s pollution control regulation related to the failure to provide sufficient capacity to retain all oily bilge water onboard the vessel. The complaint alleges the defendants discharged the contents of the engine room bilge, which contains a mixture of fuel, lubricating oils, water, and other wastes, into the ocean rather than retain the waste onboard. Finally, the complaint includes a claim for violations of the Coast Guard’s pollution control regulation requiring dedicated piping to properly transfer oily bilge waste to a shore-side facility for disposal. The violations were discovered by the Coast Guard during boarding operations.

As part of the settlement, the company and company managers will pay civil penalties of $500,000, and the captain of the vessel will pay penalties of $11,000. In addition to payment of the civil penalties, the consent decree requires corrective measures to improve the operation of the vessel and prevent future discharges. The defendants will be required, among other things, to repair the vessel to reduce the generation of oily bilge water, operate within the vessels’ capacity to retain oily bilge for the full length of planned voyages, provide crew and management training on the proper handling of oily wastes, document all oil and oily waste transfers on and off of the vessels, including documenting proper disposal of engine room bilge water at a shore reception facility, and submit compliance reports to the government.

“This case displayed the exceptional joint efforts of Sector Southeastern New England and the Department of Justice, in holding those who pollute our waters accountable,” said Captain Chris J. Glander, commander of Coast Guard Sector Southeastern New England in Woods Hole, Massachusetts. “The results announced today are a prime example of the importance of the Coast Guard's prevention and marine environmental response missions. We are extremely proud of the teamwork displayed by our boarding teams and marine safety professionals that were an integral part of responding and investigating these occurrences.”