"Flashmob" to Support the Cruise Industry in Venice 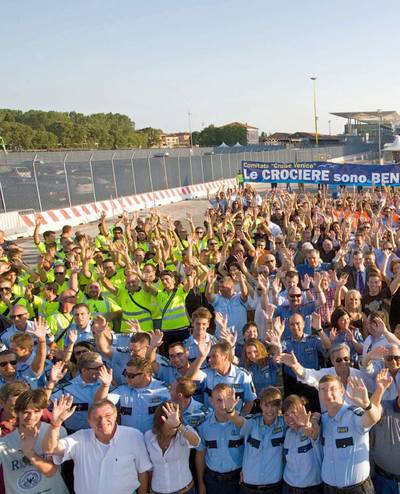 More than 600 people responded to the appeal launched by the Cruise Venice Committee, the Association which promotes and supports the Laguna’s cruise industry. Porters, mooring, security and tourism operators of the city gathered at the passenger terminal to support the cruise industry, an excellent production sector for Venice, which has made the city Europe's main homeport.

The picture shows a meaningful moment of last week’s event, which involved qualified businesses representing the economic activity directly or indirectly generated by the cruise industry, which showed their support for the development of cruise traffic in Venice.

“Our intention was not “to give a trial of strength” against those who intend to close the harbour to large cruise ships,” explained Massimo Bernardo, Chairman of the Cruise Venice Committee. “Rather we wanted to send an urgent call to Venice as a whole. It is necessary to understand the importance of supporting over 3,000 jobs, the income of hundreds of households, but above all the cultural interest which Venice is able to raise: in Venice, a cruise begins precisely with a visit to the city itself. This is the only and fundamental prerequisite to be considered during negotiations aimed at defining a common strategy with the goal of optimising, rather than hindering, an industry that is extremely important also for all of Venice’s taxpayers.”