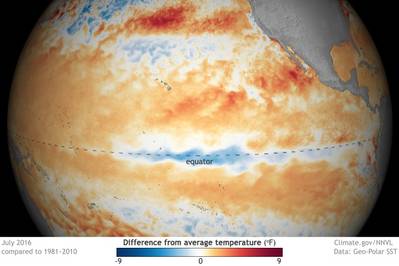 A U.S. government weather forecaster reduced its outlook on Thursday for La Nina conditions to develop during the Northern Hemisphere fall and winter 2016/17, saying neutral conditions were more likely.

The Climate Prediction Center (CPC), an agency of the National Weather Service, said in a monthly forecast there was a 55 to 60 percent chance of El Nino-Southern Oscillation neutral conditions, after last month saying that La Nina conditions were slightly favored to occur.
(Reporting By Luc Cohen)