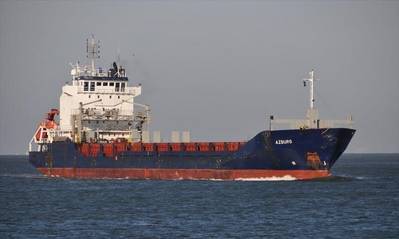 A foreign-flagged merchant ship was hit by a Russian navy missile in the besieged southern Ukrainian port city of Mariupol with one crew member needing medical care, a Ukrainian official said on Tuesday.

Ukraine said it was bracing for about 60,000 Russian reservists to be called in to reinforce Moscow's offensive in the east, where Russia's main targets have included Mariupol and Kharkiv, the country's second-largest city.

"The ship was burned and all 12 crew members were evacuated to another ship. One crew member needed medical help which was given to him and he was evacuated," Vyshnov told Reuters.

He did not know if the ship was carrying any cargo.

British security company Ambrey Intelligence said separately the vessel arrived in Mariupol on Feb. 23 and was unable to leave Ukrainian waters because of the closure of the port.

The vessel's Malta-based owner could not be reached for comment.

Russian officials did not immediately respond to a request for comment.

Russia's military took control of waterways around Ukraine when it invaded on Feb. 24 in what Moscow calls a "special military operation" to demilitarize and "denazify" the country.

The Kremlin's position is rejected by Kyiv and the West which sees it as a pretext for an unprovoked invasion.

Two seafarers have been killed and five other merchant vessels hit by projectiles - which sank one of them - off Ukraine's coast since the start of the conflict, shipping officials say.

UN shipping agency the International Maritime Organization (IMO) said there were 86 merchant ships still stuck in Ukrainian ports and waters as of March 30, with around 1,000 seafarers unable to sail.

Maritime officials have said supplies are running low onboard the ships, which also face multiple perils including missiles and floating mines.

"As well as the dangers arising from bombardment, many of the ships concerned now lack food, fuel, fresh water, and other vital supplies," the IMO said.

"The situation of the seafarers from many countries is becoming increasingly untenable as a result, presenting grave risks to their health and wellbeing."

Ukrainian President Volodymyr Zelenskiy said on Tuesday Ukraine's efforts to push back Russian troops from Mariupol were facing difficulties and the military situation was "very difficult".