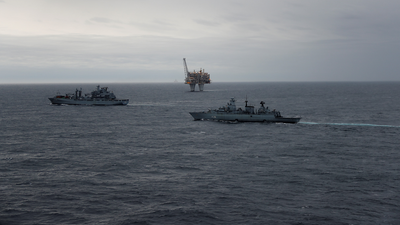 German Navy ships next to Troll A platform in Norway. ©German Navy

The German navy is helping Norway to protect critical maritime infrastructure such as oil rigs, undersea cables, and pipelines, and is ready to do the same off the Danish and Swedish coasts, its head said on Thursday.

Bordering Russia in the north, Norway is Europe's biggest producer of natural gas and oil and has an extremely long coast that is hard to protect. It operates an extensive network of pipelines that connect the country with Britain and Europe.

NATO has pledged to boost the protection of critical infrastructure after the ruptures in September in the Nord Stream 1 and Nord Stream 2 gas pipelines, laid on the bed of the Baltic Sea from Russia to Germany.

Norway's prime minister also said it would deploy its military to protect its oil and gas installations. Sweden and Denmark have both concluded that four leaks on Nord Stream 1 and 2 were caused by explosions, but have not said who might be responsible.

Russia's defense ministry said on Saturday that British navy personnel blew up the pipelines, a claim that London said was false.

In mid-October, the secretary-general said NATO had already doubled its presence in the Baltic and the North Seas to over 30 ships supported by aircraft and undersea activities.

Details of which ships are deployed where are not usually given. German navy chief Vice-Admiral Jan Christian Kaack said in a statement Berlin had three frigates and a supply ship with some 700 sailors for exercises in the Norway region that would also help monitor the situation, coordinated with NATO.

Kaack said the navy was making good on Chancellor Olaf Scholz's promise to support Norway, Denmark and Sweden in protecting their maritime infrastructure after the Nord Stream incidents.

"With its presence in Norwegian waters, the German navy is fulfilling NATO's pledge of 'one for all, all for one'," he said. He said overflights by maritime patrol aircraft would also contribute to establishing situational awareness.