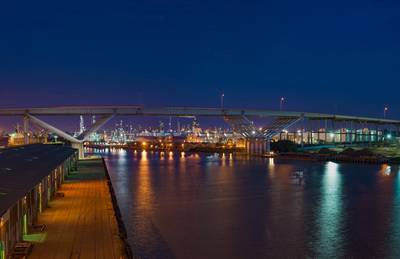 Great Lakes Dredge & Dock Corporation announced it has signed a $92.5 million dredging contract for the Houston Ship Channel Widening and Improvement Project 11. This is the first phase of the extensive, multi-phase Houston Ship Channel billion-dollar expansion and deepening program. Dredging is expected to commence in the first quarter of 2022 with estimated completion in the fourth quarter of 2022.

Project 11 is a plan to widen the 52- mile Houston Ship Channel which winds from the Gulf of Mexico through shallow Galveston Bay and up through the port. Great Lakes Dredge & Dock’s awarded work entails the dredging of 11½-miles of the channel, widening a major portion of the Galveston Bay reach from 530 to 700 feet.

The Port of Houston is the nation’s largest waterborne tonnage port and a major container gateway for Texas and millions of people who live in neighboring areas. This project will allow for larger container and petrochemical ships to more safely and efficiently navigate the Houston Ship Channel to access the Port of Houston.

In addition to widening the channel, Great Lakes Dredge & Dock will pump 1.6 million cubic yards of dredged material to beneficially construct a new island for bird habitat and oyster mitigation.

In the evaluation of proposals, Port of Houston placed significant value on the dredging equipment’s total emissions of nitrogen oxide (NOx) while performing the contract. David Simonelli, Chief Operating Officer, commented, “Great Lakes Dredge & Dock is investing $4.5 million dollars to improve emissions on the cutter suction dredge Carolina and the company’s largest booster station Buster, by upgrading the vessels’ diesel engines and installing selective catalytic reduction (SCR) systems. The upgrades and SCRs are designed to treat the exhaust of the engines to reduce NOx and particulate matter (PM) emissions. Retrofitting our equipment demonstrates our commitment to Port of Houston and supports our goal of reducing our overall environmental impact as we strive to leave the areas we work in a better state than when we started.”

Lasse Petterson, President and Chief Executive Officer of Great Lakes Dredge & Dock, commented, “We are very pleased to have won this first contract within a year of relocating and becoming a Houston based contractor. The RFP tendering process involved an extensive evaluation of the competing contractors’ past port deepening experience, execution methods, equipment capabilities, environmental mitigation and safe work methods in addition to price. We thank the Port of Houston for the award of this important contract and are pleased to add this work to our extensive list of port deepening projects. We believe this important project will deliver long standing benefits to the local economy and local workers. We look forward to begin dredging operations and executing this project safely, on time and within budget.”