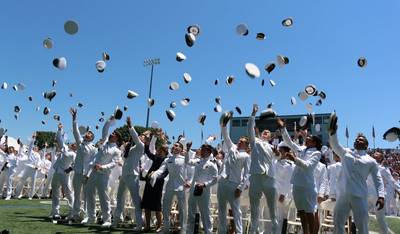 This year’s graduates represent 42 states, the District of Columbia, and the three foreign countries: Republic Korea, Republic of Panama and Malaysia.

Superintendent, Rear Adm. James A. Helis, USMS, charged the graduates to “lead with character and courage.”  He said, “the American people will look to you, from this day forward, to protect and advance the Nation’s marine transportation and defense needs in peace and war.  As officers in the Merchant Marine and the Armed Forces, you will be responsible for the safety, the wellbeing, and the very lives of those with whom you sail and serve.”

Helis recognized and thanked Director of Music Capt. Kenneth R. Force, USMS, and Department of Marine Transportation Professor Capt. Douglas A. Hard, USMS, who are both retiring this year, for their many years of service to the Academy.

Speaking to the graduates, Distinguished Alumnus Speaker Rear Adm. Philip H. Greene, Jr., U.S. Navy, Retired, Class of ’78, said, “you are our future leaders of leaders,” said.  He charged the graduates and new alumni to “always remember to live by our motto, ACTA NON VERBA!”

Valedictorian Thomas Kloepfer, of Amityville, N.Y., said, “there is one thing we are all guaranteed to miss: our classmates.” Quoting musician Tim McGraw, he urged his classmates to “always stay humble and kind.”

Class President Benjamin Morris, of Panama City, Fla., thanked the families noting, “without your help we wouldn’t be here.”  He commended his classmates saying, “everyone did their part to get the 229 of us here to graduate.”

As part of the commencement exercises 38 graduates were sworn in as active duty officers in the Army, Navy, Air Force and Coast Guard. Another 25 graduates will be sworn in to the Marine Corps, Air Force and Coast Guard at a later date.  The remaining U.S. graduates will serve as Navy reservists in the Strategic Sealift Officer Program while working aboard deep sea vessels, offshore supply vessels, tugs, towing vessels, and international flag vessels.

“You can’t do it alone; it’s through your family and friends that you get through,” said Daniel Giaccio-Williams, of East Northport, N.Y.  “It’s a beautiful day!”