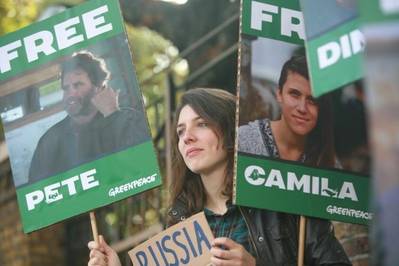 Regarding the upcoming hearing at the International Tribunal for the Law of the Sea (ITLOS), where the Netherlands is bringing a case seeking the release of the Greenpeace ship 'Arctic Sunrise' and its crew, Greenpeace International General Counsel Jasper Teulings informs:

Background
ITLOS is an independent judicial body located in Hamburg, Germany, established to resolve disputes about the interpretation and application of the United Nations Convention on the Law of the Sea (UNCLOS).

The Dutch authorities initiated an arbitration case against Russia on October 4, and on October 21 called for ITLOS to indicate ‘provisional measures’ pending the outcome of that arbitration.

In a “provisional measures” case like this one, ITLOS can order measures it thinks appropriate to preserve the respective rights of the Netherlands and the Russian Federation, pending the final determination of the dispute. If ITLOS rules in favour of the Netherlands, the 28 Greenpeace International activists, freelance photographer Denis Sinyakov and freelance videographer Kieron Bryan could go home while they await confirmation of a Russian court date.

The ITLOS hearing is scheduled to start at 10am CET on November 6 2013.

Jasper Teulings adds: “We appreciate the Dutch government bringing this case and thank the Tribunal for considering it. We understand that the job of the Tribunal is limited to deciding questions which cannot wait until full arbitration - only in arbitration will the issues will be decided on the merits.

Greenpeace International is confident that the Tribunal will take appropriate account of the fundamental rights of the Arctic 30, and the impact of their detention on those rights, in reaching its eventual decision.

We at Greenpeace are great believers in international law - after all the UN Convention on the Law of the Sea is primarily there to protect the marine environment.”