Greenpeace Settles Charges After Blocking Port of Houston in 2019 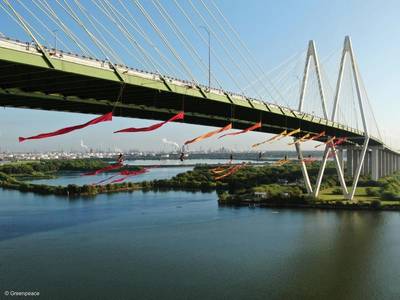 Greenpeace members halted shipping in September 2019 by dangling on ropes from a bridge over the Houston Ship Channel to bring attention to climate change concerns during a presidential debate in the city.

Felony charges of disrupting critical energy infrastructure were later dismissed by a Houston grand jury. The state pursued lesser charges of obstructing a highway against 25 Greenpeace members involved in the protest.

The agreement calls for charges to be dismissed against the 25 in six months if there are no further violations. Members of the group also agreed to pay $250 in court costs to settle the state highway obstruction charges.

Greenpeace paid $58,450 in restitution to local police and fire departments that retrieved the protesters and their banners from the bridge.

"They wasted the time of police officers and firefighters, who potentially could have been used to respond to real emergencies,” Harris County District Attorney Kim Ogg said.

Federal charges against 22 of the activists for blocking a waterway remain outstanding.

A Greenpeace USA spokesperson said the protesters accepted the state pre-trial intervention agreement without entering a guilty plea. The organization was not charged.

Federal prosecutors did not reply to requests for comment on the status of its case.